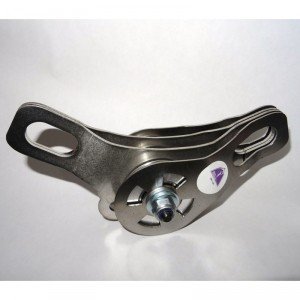 Double pulleys, are known ! Quadruple are known ! But the triple are unheard in slackline or climbing !! Only boats use triple pulleys. Triceratops are not dinosaurs : there’re the latest innovation from Slack Mountain, : triple pulleys ! Performance is excellent, it is announced at 97%, so almost no loss. Unit price is € 80 and only 147 € for a pair. It’s cheaper than the Armstrong from Slack.fr, but expensiver than the Slackimoufle of Slack’inov … Difficult to compare as they are the only triple pulleys on the market. So it is between the price of a quadruple and a double : quite reasonable in fact ! Ergonomically, it is inspired by the latest model of the dual pulley from Slack.fr : a flange fixed grip making multiplier office docking allows to blocker under its hauling , thus saving a sling ! There is no friction. With only 960gr it is normal: it is not super light but it’s hard hard to do any better actually! For the shape is not color tuning fashion style: chrome raw metal color : oldshool style ! We always keep the best for last – the resistance : a workload to 1T6 and breaking load at 8t, which leaves room for jumpeurs ! Hold on, you know that manufacturers always leave room on the predicted failure load, and we have a great and surprising information from Romain Schempf , the creator of Triceratop : ” During my labatory test the triple pulleys did not broke : the rope broke before at 105KN be 10t5 ” Wow! Hurry up before the stock runs out !

To purchase the beast !